Located directly north of the Canary Wharf’s Crossrail Place is the 3-hectare site known as North Quay. Planning has been secured for a 2.5 million sq. ft mixed-use development.

North Quay is a 3.28 hectare site previously used as a construction laydown site for the Canary Wharf Crossrail Station, now the Elizabeth line. The Site is located to the north of the Isle of Dogs, within the administrative boundary of the London Borough Tower Hamlets, at Canary Wharf. It is bounded by Crossrail Place to the south, Aspen Way to the north, Hertsmere Road and the Marriott Hotel to the west and Billingsgate Market to the east.

Outline Planning Permission and Listed Building Consent was secured in March 2022 for the redevelopment of the North Quay site (the Site).

North Quay represents a unique and important opportunity to bridge the gap between Canary Wharf and South Poplar. The ambition is to create a masterplan which guarantees significant public realm and open space and enhanced north-south connectivity but provides flexibility regarding built form and uses which are delivered to allow the site to respond to the volatile post Brexit and COVID market.

Between October 2019 and March 2020 we met with many local stakeholders and held two stages of public consultation to understand local views on the proposals, involving over 250 people. The feedback we received during consultation has helped to shape the priorities for North Quay and how it can benefit the area. Participants told us that the main priorities for the development were access to public space and the waterfront, improved connections between Poplar and Canary Wharf, better pedestrian routes and cycle access, and leisure uses, all of which have been incorporated into the proposals.

The proposals for North Quay will deliver up to 355,000 sq m of floorspace within a range of uses which could include office and life science, residential, retail, community, leisure, hotel, co-living and student.  A number of public realm and open space commitments (all of which will be publicly accessible) will be delivered irrespective of the buildings and uses which come forward, namely:

We are now developing a Reserved Matters Application for the first building at North Quay.  Sitting at the western end of the site adjacent to West India Quay DLR station we intend to deliver a lifescience building in a joint venture partnership with Kadans Science Partner.  We are currently undertaking formal pre-application meetings with Tower Hamlets Council and intend to submit an application by the end of the year. 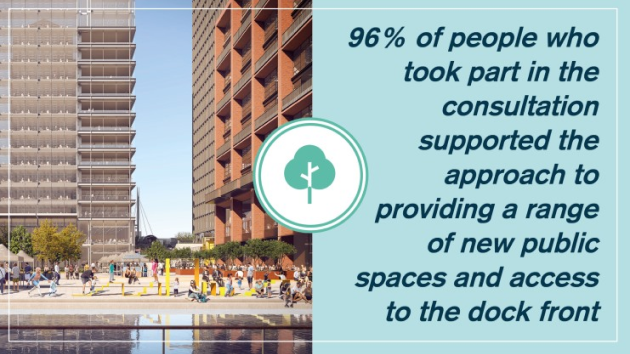