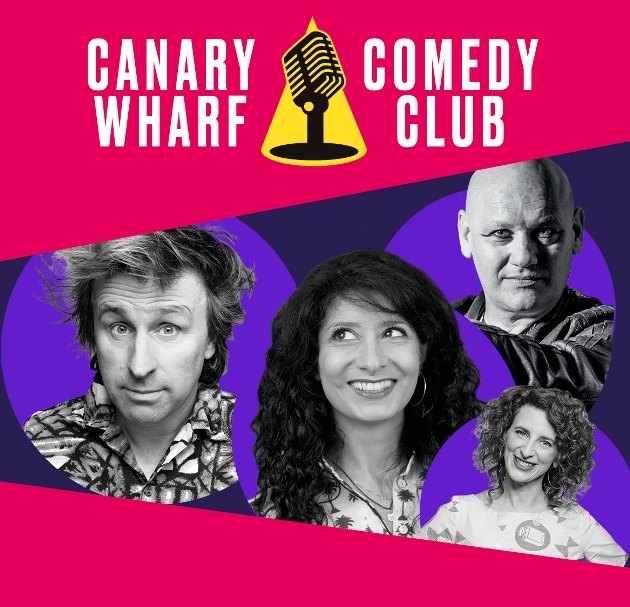 Canary Wharf’s Comedy Club returns on Friday 1 April with a critically acclaimed line-up taking to the stage. Head over to the East Wintergarden for a night of laughter and fun from top billed comics including Milton Jones, Terry Alderton and Shaparak Khorsandi, compered by the self-appointed Felicity Ward.

The event will fittingly take place on April Fool’s Day, with tickets available to buy in advance or on the door for just £16, subject to availability. The doors will open from 6.15pm, ahead of a 7pm start, giving guests some time to buy drinks at the bar before taking their seats.

One-liner king Milton Jones is regularly on Mock the Week (BBC2), has appeared on Michael McIntyre’s Comedy Roadshow (BBC1), Live at the Apollo (BBC1) and he has headlined Dave’s One Night Stand (DAVE). In 2011, Milton’s radio show won a silver Sony Award, as well as winning Chortle Headliner of the Year for his stand up. His radio show was also nominated for a Writers Guild Award in 2012, and he has just finished his eleventh series on Radio 4.

Terry Alderton is one of the most exciting comedians around, regularly performing all over the globe, and picking up the odd award. His TV stand up credits include, Live At The Apollo (BBC), Dave’s One Night Stand (DAVE), Comedy Road Show (BBC), The Stand Up Show (BBC) and Live At The Comedy Store (Comedy Central). He has also written and performed in three series of his BBC Radio 4 show Terry Alderton’s All Crazy Now.

Shaparak Khorsandi established herself as one of the country’s finest comedians in 2006 with her sell out Edinburgh show, Asylum Speaker. In typical Shappi style, this show told the story of how her family were forced to flee Iran and gain asylum in the UK. Her father’s popularity as a satirist attacking the regime has ensured they cannot return to Iran. As Shaparak says, “obviously there’s free speech in Iran, but little freedom after you’ve spoke”. Shaparak’s career has taken her to all corners of the globe, she has appeared on countless TV & Radio shows including Mock The Week, 8 Out Of 10 Cats, Have I Got News For You, QI, Just a Minute & other flagship radio 4 programmes.

Grown from a carob pod in a sunny, Central Coast national park, Felicity Ward is a multi-award-winning comedian, actor and writer who has toured her award-winning, sell-out shows across the world, winning hearts of audiences and critics everywhere she goes. Felicity has appeared on Spicks and Specks, The Ronnie Johns Half Hour, Good News Week, Talking About Your Generation, Thank God You’re Here, The Librarians, The Project and Ronny Chieng: International Student along with multiple appearances on The MICF Oxfam Gala and MICF Comedy All Stars.

Visit canarywharf.com for full details and to book

Guests looking for a pre-comedy dinner can head to one of hundreds of bars and restaurants at Canary Wharf including the new Hawksmoor, Caravan, Seoul Bird, Marugame Udon, Gallio and Six by Nico.

The Comedy Club is part of the wider ongoing events programme on the Estate, so there’s always something to enjoy. Canary Wharf has it all – it’s created a 24/7 city where people can work, live and thrive and enjoy all the benefits; great transport links, access to green spaces and waterside living; and a wide range of amenities including an award-winning arts and events programme.

Visitors after even more culture will be able to see the UK’s largest collection of free to visit public art, which is dotted around the Estate, including 110 permanent works by over 50 international artists.

The Company’s current £1.3bn construction activity is composed of 500k square feet of commercial properties and over 1,600 new homes for sale and rent.