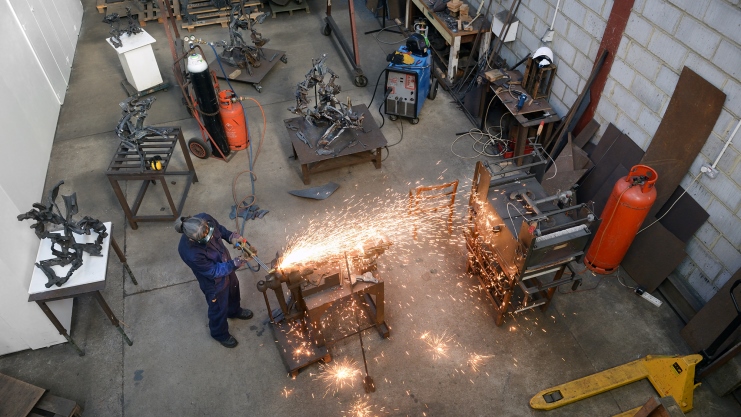 The selection covers forty-four years of her sculptural development from a time when it was unusual for a woman to choose to work in a heavy industrial material, let alone using welding and forging techniques, until today when not an eyebrow would be raised at her choices.

After studying at Bath Academy of Art and Saint Martin’s School of Art, London, where Anthony Caro taught in the Sculpture Department, Gili was invited to join Stockwell Depot, an artists’ studio complex in a disused Victorian brewery. Lambeth Council had offered the premises to a group of young artists from Saint Martin’s in 1967, which they accepted readily. Both painters and sculptors worked there and held annual exhibitions in which Gili’s early pieces represented in this exhibition were shown: Shift and Splay, both of 1974 and Cut Out 1977, Blow 1978-79 and Rise 1979. Gili was the only female sculptor in the studios.

The sense of movement in Gili’s sculpture is a vital and continuing element compositionally. When she moved from cutting and welding flat sheets of steel to forging custom-made elements that she combined into sculptures of differing scale, she found a greater range of possibilities opened up to her. The key sculpture that set the course for the development of her more complex compositions was Leonide 1981-82, which has been kindly loaned to the exhibition by Bradford Museums and Galleries, City of Bradford MDC.

Although Leonide is clearly based on the moving human form, in other works Gili takes the route of abstraction to create pathways through her sculptures that have become more complex over time, culminating, in this selection, with Escapade 2017-18.

The exhibition also includes a number of small pieces cast in bronze and made in clay. The bronze Twyblade, also of 2017-18, was cast from a paper original, a technique which promises a new chapter for future development.

Also on display are large-scale photographs of Katherine Gili working in her Kent studio taken by photographer Anne Purkiss, which bring alive the sculptor’s working environment and methodology.

The exhibition will go on show in January as part of Canary Wharf’s ongoing temporary exhibition program. Since the inception of Canary Wharf’s cultural master plan, the arts have played an important role in the development and success of the 128-acre Estate.  Canary Wharf Group has one of the UK’s largest collections of public art, with more than 70 permanent works by over 50 world-renowned artists and craftsmen.

Visitors can attend a tour of the exhibition, hosted by curator Ann Elliott in conversation with the artist, on Tuesday 12February 6.30-7.15pm.  The tour is free but visitors should email publicart@canarywharf.com to reserve a space.

Katherine Gili was born in 1948 in Oxford. She studied sculpture at Bath Academy of Art 1966 to 1970 and at Saint Martin’s School of Art 1971 to 1973. From Saint Martin’s she worked in a number of London studios before finally creating a workspace in a vast agricultural building in rural Kent in 1994, where she works alongside her husband, the sculptor Robert Persey. In the early years of her career she taught at a number of art schools, most notably Saint Martin’s and Norwich.

Her sculpture was first exhibited at the Museum of Modern Art, Oxford in 1973, since when she has exhibited regularly in numerous group exhibitions and significant solo shows at the Serpentine Gallery, London 1977; the Salander-O’Reilly Gallery, New York 1981 and a career survey at the Poussin Gallery, London 2011. Solo exhibitions of her sculpture and drawings were shown at Felix & Spear, London in 2016 and 2018. Her work was shown at Canary Wharf in a group exhibition Steel 2006.

Gili’s work is represented in the collections of the Arts Council of Great Britain; Bradford Museums and Galleries; City of Lugano, Switzerland and the General Electric Corporation, USA. There are also examples of her sculptures in private collections in Britain, Spain and the United States. In 1999 Gili was elected a Fellow of the Royal Society of Sculptors and was awarded the Jack Goldhill Award for Sculpture in the Royal Academy Summer Exhibition 2013. She lives and works in Kent.

Katherine Gili is represented in London by the gallery Felix & Spear.