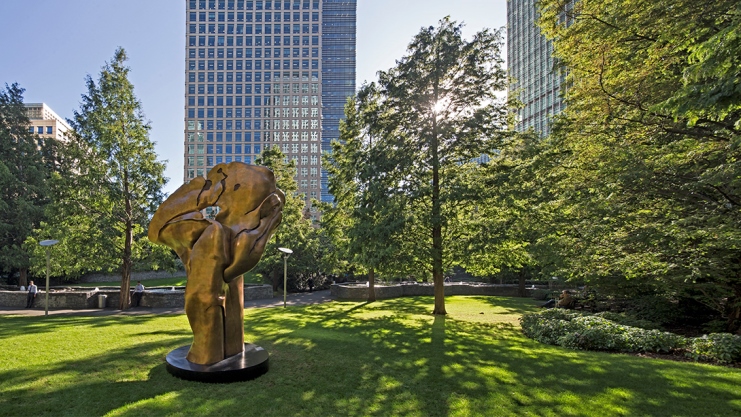 Fortuna, the impressive sculpture, is situated in the award-winning and tranquil Jubilee Park, designed by international landscape architect, Jacques Wirtz. At five metres high, Fortuna, is Blumenfeld’s most ambitious work to date in a career that spans over 50 years. The work in patinated bronze is inspired by the eponymous Roman goddess of destiny and evokes the fullness and complexity of the human condition.

In tandem with its permanent art collection, Canary Wharf also boasts a year-round arts and events programme with over 200 events each year including the annual Winter Lights Festival and temporary exhibition programme.

Best known for her large-scale outdoor commissions, Blumenfeld is passionate about bringing sculpture into public spaces. Her most notable works can be found in London, including Tempesta overlooking Hyde Park, as well as the recently unveiled bronze Meridiana in Holland Park.

Sir George Iacobescu, Chairman and Chief Executive Officer, Canary Wharf Group, comments: “We’re immensely proud to be unveiling this extraordinary piece from Helaine Blumenfeld in Jubilee Park and adding it to our ever-expanding collection of public art. There’s a real synergy between our vision to make Canary Wharf a lifestyle destination for everyone to enjoy and Blumenfeld’s passion for making art accessible to the general public.”

Helaine Blumenfeld on Fortuna comments: “I am honoured to have been invited to create a sculpture for Canary Wharf. My aim has been not only to enhance the environment, but also to connect and ultimately inspire all those who will be living, working or just passing by. Like the Roman goddess who shares the same name, Fortuna is an expression of the fullness and complexity of the human condition with all its turbulence, commitment, fragility, hope, inner strength, joy, dependency and continuity. I hope that in Fortuna, viewers will find a revelation of the many facets of life, and above all, the positive power of beauty and the sense of possibility it offers us.”

Her commission for the Canary Wharf Group coincides with a major exhibition of her new work at the Hignell Gallery in Mayfair, which presents a personal portrait of Blumenfeld’s career. Entitled Hard Beauty, the collection will be on view between 21 September and 27 November 2016.

The Group’s world-class, year-round arts and events programme offers over 200 diverse and culturally inspiring events performed throughout the Estate. Winner of the 2010 Christie’s Award for Best Corporate Art Collection and Programme at the International Art and Work Awards, Canary Wharf Group showcases over 65 pieces of permanent art throughout the Estate, designed and created by more than 50 artists and craftsmen. A regular exhibition programme in the Lobby of One Canada Square and Jubilee Park further adds to the Estate’s comprehensive cultural and creative offering.

About Helaine Blumenfeld
Internationally-acclaimed sculptor Helaine Blumenfeld OBE was born in New York in 1942. She studied at Columbia University, New York, followed by Oxford University. She later completed a PhD in Philosophy at Columbia in 1965. Following her studies, Blumenfeld moved to Paris to study sculpture at the Ecole de la Grande Chaumière (1962–63), where she studied with Russian sculptor Ossip Zadkine.

Helaine Blumenfeld moved to England in 1969 and soon after, exhibited at Kettle’s Yard, Cambridge. 1975 marked a turning point in Blumenfeld’s career when she first visited Pietrasanta, Italy, and began carving in marble as well as working in bronze. In 1985, she had a seminal joint exhibition with Henry Moore at the Alex Rosenberg Gallery, New York.

In 2007 Blumenfeld became the first woman to win the Il Premio Pietrasanta e la Versilia Nel Mondo, adding her name to the list of winners of this honour including Botero, Pomodoro and Marc Quinn. In 2008 the Royal British Society of Sculptors held a major retrospective of her work and in 2011 Blumenfeld was awarded an OBE to mark her achievements in sculpture.

Blumenfeld has exhibited her work extensively both in the UK, including recently at Salisbury Cathedral (2013) and London’s Berkeley Square (2015), and internationally in Europe and the United States. Her numerous public commissions include a monumental marble sculpture called ‘Tempesta’ at The Lancasters overlooking Hyde Park, which was installed in 2012.

In May 2016, Blumenfeld’s new bronze sculpture ‘Meridiana’ was installed in Holland Park as part of a series celebrating the work of female sculptors, while this summer will see Blumenfeld’s largest work to date permanently installed at Canary Wharf. Today, Helaine Blumenfeld lives and works between her studios in Cambridge and Pietrasanta.

Helaine Blumenfeld’s facility for positioning her sculpture in the magical zone between abstraction and figuration has been the key to her success. For Blumenfeld, who once said “art is a reflection of life – nothing ever stays the same”, sculpture is never concerned simply with observation or narrative, but with experience, with a knowledge which is far from obvious but which advances us in our understanding of who we are and how we fit into the world around us.

About Hard Beauty
Hignell Gallery is proud to announce Hard Beauty, an exhibition which presents a personal portrait of the career of sculptor Helaine Blumenfeld OBE. Curated by Director Abby Hignell, Hard Beauty will be held across two floors of the gallery space in Shepherd’s Market, Mayfair, from 22 September to 27 November 2016.

The exhibition offers a new insight into Blumenfeld’s impact on contemporary sculpture at a pivotal moment in her career, where she joins a new gallery space and creates work that speaks to this daring change. The exhibition features new pieces in bronze, marble and terracotta. Moments of uncertainty and change have punctuated her career – allowing vulnerability to lead to opportunity. Blumenfeld continues to take risks in her work and career that imbue her sculpture with an energy and vitality resonant of the artist herself.
Examining the narrative arc of Blumenfeld’s career, Hard Beauty explores her innovative sculptural practice, the tension between progress and destruction, intimacy and resistance; revealing the constant evolution of Blumenfeld’s approach to the medium and its ability to evoke powerful emotion and articulate universal concepts in its form.