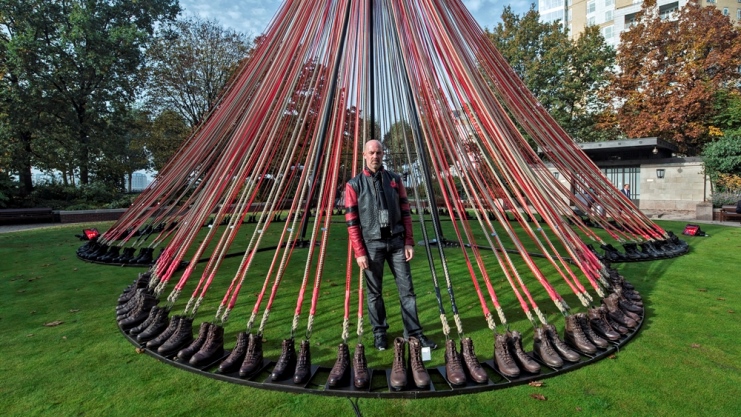 Remembrance Art Trail in Association with The Royal British Legion to open at Canary Wharf in November – 25.10.16

The UK’s first Remembrance Art Trail is set to open in Canary Wharf. Created by multi-disciplinary and international award-winning artist, Mark Humphrey, the trail has been commissioned by Canary Wharf Group, in association with The Royal British Legion and has been constructed with the Corps of Royal Engineers. The trail will consist of seven art installations located throughout the Canary Wharf Estate. Each piece of work will have a different focus within the wider theme of military experience and together they tell an extraordinary visual story about the nature of sacrifice and service by our Armed Forces.

Opening to the public on 1 November, the pieces will be installed by serving and former members of the Armed Forces and the Corps of Royal Engineers. The art works will be located at seven prominent points across the Canary Wharf Estate and will be open daily. The installations can be explored in any order, but will come together to tell a powerful visual story that encourages personal reflection and contemplation. The seven beautifully crafted pieces are the culmination of over a year’s work by London based artist, Mark Humphrey. Each of the pieces is being created here in the UK at the Royal School of Military Engineering (RSME) in Chatham, using materials salvaged from military sources and some military manufacturing techniques. Mark has previously created several large scale artworks for the Armed Forces and military charities, including the marble war memorial poppy, titled ‘Forever’, at Royal Wootton Bassett, in addition to the First World War Centenary art statue obelisk, ‘Every Man Remembered’, commissioned by The Royal British Legion.

Speaking about his work, artist Mark Humphrey said: “My idea for the Remembrance Trail attempts to engage the public during poppy appeal, by capturing the emotion of the armed forces. Using military engineering, materials and equipment, the artworks are designed for reflection, awareness and fund raising, paying respect to our servicemen and women.”

Speaking about the trail, Matt Maer, Director Group Security & Business Continuity, of Canary Wharf Group and one of a number of former servicemen employed by the company said: “The Royal British Legion’s Poppy Appeal activity at Canary Wharf is always embraced by those who live and work in the area. Recognising the support, this year, we decided to do something on a larger scale to pay tribute to the sacrifices made by our Armed Forces. A number of the team here at Canary Wharf have served in the Forces. Indeed, around 65% of our Security Staff are former Servicemen. For them and those still serving this really does mark a momentous event.”

This not only offers an occasion for the public to reflect on current serving and fallen servicemen and women but is an excellent opportunity for the Royal Engineers to showcase their artisan skills to the Public during the year of ‘Sapper 300’, the commemoration of our tercentenary.”

The exhibition is being delivered in association with The Royal British Legion. As the nation’s custodian of Remembrance the Legion is the UK’s only charity with Remembrance within its core charitable objectives.

Speaking about the project, The Right Reverend Nigel McCulloch KCVO of The Royal British Legion’s Head of Remembrance said:

“Projects such as the Trail are important to the Legion’s work in bringing Remembrance to new and more diverse audiences, and ensuring they have opportunities to participate. The trail will raise awareness of the vital support work carried out for the Armed Forces community by the Legion and a number of other military charities who form part of the Legion’s network.

After the trail closes, some of the pieces will be loaned to supporting charities in order to help continue raise awareness and donations. These include, RAF Benevolent Fund, Royal Navy and Royal Marines Charity, ABF The Soldiers’ Charity, Not Forgotten Association, Britain’s Bravest Manufacturer’s Company, The Poppy Factory Richmond, Stoll and Combat Stress.

Mark Humphrey is an international award-winning visionary Philanthropic Artist based in London, with over 25 years’ experience in the art and design industry. Inventor of unusual things, designing multi-disciplined, engaging, and emotive public artworks, leading project teams with determined enthusiasm. With energetic focus, prolific ideas and expeditious results, his pioneering custom-made masterpieces are specialist, original, and unique.

About Royal British Legion
The Royal British Legion’s work is encapsulated in its motto: Live On – to the memory of the fallen and the future of the living. The Legion is the nation’s biggest Armed Forces charity providing care and support to all members of the British Armed Forces past and present and their families. It is the national custodian of Remembrance and safeguards the Military Covenant between the nation and its Armed Forces. It is well known for the annual Poppy Appeal, and its emblem the red poppy. www.britishlegion.org.uk

The Canary Wharf Estate is a major retail destination comprising five shopping malls, including the new leisure development, Crossrail Place, housing one of London’s most stunning roof gardens.  It also has world-class, year-round arts and events programme offering over 100 diverse and culturally inspiring events performed throughout the Estate.

About 1 RSME Regiment
1 RSME Regiment, located at Chatham Station, Kent, is the provider of artisan training to the Corps of Royal Engineers. This artisan training is delivered to over 1200 Sappers a year in skills ranging from Bricklaying and Concreting, Plant Operation, Draughtsman and Surveying to Electrical Installation and Carpentry.

As the Corps of Royal Engineers celebrates its 300th Anniversary, Chatham Station, as the home of the Corps, is at the centre of the tercentenary celebrations.

About the Charities
Combat Stress – is a leading mental health and well-being charity for the Armed Forces community. Combat Stress provides specialist clinical treatment and welfare support to UK veterans with mental health conditions. The Royal British Legion gives them office space within Legion Pop In Centres where they hold community clinics. The Legion provides CS with funding and a recent grant has helped fund research that Combat Stress has been carrying out. Brothers in Arms

Stoll – Stoll is a veterans’ charity and Housing Association that has been helping ex-Service personnel since 1916. Stoll provides safe, high quality housing and access to services that enable vulnerable and disabled Veterans in need of support to live fulfilling, independent lives. The Legion provides funding to their Veterans’ Nomination Scheme (VNS). A national project providing access to housing association and local authority properties for veterans who are ready to move on from temporary accommodation following a period of homelessness, or are living in unsuitable accommodation.  Lost Soldiers

The Poppy Factory Richmond – actually a separate charity to The Royal British Legion, and does a huge amount of unknown and very worthy work getting veterans with health conditions or impairments into employment. It would help raise awareness of this important part of their nationwide work, in addition to the 5million poppies the factory in Richmond produces each year. The Legion has recently provided funding to extend the provision of employability support for wounded, injured and sick (WIS) veterans in Wales to enable a more comprehensive service delivery in the region, and the opportunity to better provide the intensive one-on-one support in South Wales that is so important for our clients in achieving successful, long-term sustained employment.  Point of Every Man’s Land

Britain’s Bravest Manufacturer’s Company – again a separate charity who only hold the name for historical reason, however they are one of the leading AF charities in transition and employment and in the last year received a Legion grant to fund their ‘Lifeworks’ programme which equips spouses and partners of primarily currently serving personnel, but also open to those of veterans, with the tools to find and sustain work. The nature of military life and frequent upheaval can often put spouses at a disadvantage when it comes to employment, and ‘Lifeworks’ also supports the families of Ghurkhas where English is a second language overcome the challenges they might face in finding employment. At least 300 people a year benefit from the programme. They also provide funding to support residents through a well-being service in RBLI’s assisted housing village in Kent.  Boots On The Ground

Not Forgotten Association –  Founded in 1920 the Not Forgotten Association is a unique national tri-service charity which provides entertainment and recreation for the benefit of the serving wounded, injured or sick and for ex-service men and women with disabilities. They provide a grant for the NFA to put on seven concerts and afternoon teas at Legion care homes, however their work is far wider ranging than that, including Royal Parties, concerts, activity holidays, battlefield tours, walking and trekking breaks, outings and the provision of televisions and TV Licences. Lost Armies

RAF Benevolent Fund – The Royal Air Force Benevolent Fund was formed nearly 100 years ago and is the RAF’s leading welfare charity, providing financial, practical and emotional support to all members of the RAF family, estimated to be over 1.5 million people. They are here for serving and former members of the RAF, regular and reservists alike, as well as their partners and dependants. In 2015, they spent about £19 million helping over 41,000 members of the RAF family with a wide range of issues from childcare and relationship difficulties to injury and disability and from financial hardship and debt to illness and bereavement, including social isolation, mobility and self-care issues. ANA

ABF The Soldiers’ Charity – ABF The Soldiers Charity give a lifetime of support to soldiers and former soldiers from the British Army, and their immediate families, when they are in need. They make grants to individuals through their Regiments and Corps and support a wide range of specialist charities that sustain the British Army ‘family’, both at home and around the world. We take pride in being responsive, making a difference at a critical point in peoples’ lives.  The charity has been doing this since 1944, working with veterans of every conflict, and we envisage continuing doing so for the ‘long haul’ – supporting all future generations of our soldiers and their dependents. ANA