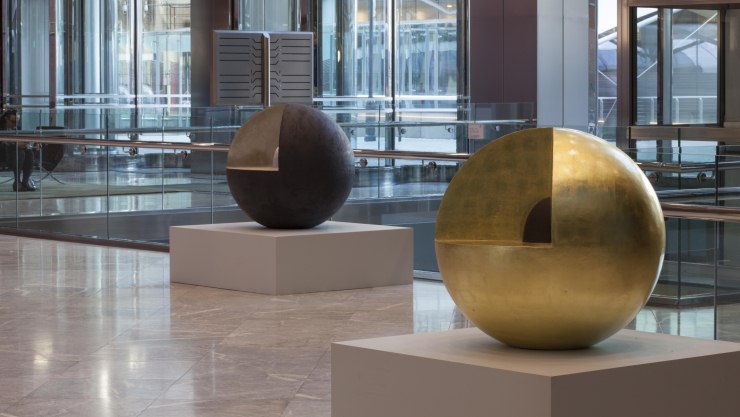 Quest the first collection of monumental sculptural ceramics by Alexander Macdonald-Buchanan, has its London debut in the lobby of One Canada Square, Canary Wharf.

Known for his success in making large-scale garden ceramics, in 2011 Macdonald-Buchanan embarked on an ambitious project – a quest – to create works of art in clay. The resulting pieces were made in three different series, charting his progress, the first of which comprised five tall vessels, made to the height of the artist’s shoulder and fluted horizontally from the base to the top in sharp inward curves. The form captures the light, which creates tonal changes across the surface at regular intervals. His use of white stoneware clay, subtly coloured with cobalt, manganese or iron oxides, when glazed gives a soft surface sheen. Named Contemplation, these vessels look as though they have been carved in stone and lightly polished.

In total contrast and with increasing confidence, in the next series, Energy, Macdonald-Buchanan took the form of a helix, again sharply defined, and applied an intense, matt blue glaze. These four vessels are confident forms, with a strong and insistent presence. A new work, Energy 2, 2016, also in the form of a helix, was made especially for the exhibition at Canary Wharf. Standing at 3.89 metres high, this is his largest sculptural piece to date.

Three large spheres, titled Revelation, complete this body of work. Here Macdonald-Buchanan used in combination different coloured clays, together with either gold or platinum leaf applied to some of the surface after firing.

Macdonald-Buchanan’s Quest collection was first shown in the Inner Court at Chatsworth House, Derbyshire in September and October 2015. The four Energy sculptures have kindly been loaned by The Devonshire Collection, with two of the Contemplation series also loaned by a private collector.

Curator Ann Elliott talks to the artist about his work on Tuesday 15 March, 6.30-7.15pm, FREE
Email visualart@canarywharf.com to reserve a place

Alexander Macdonald-Buchanan was born in London in 1970. He first started to learn about ceramics and work with clay whilst at school in Edinburgh, and in 1989 he started his first job working at Tingewick Pottery, Buckinghamshire. After travelling around potteries in Japan and the Far East, he returned to Britain in 1990 to work briefly with the Chelsea Pottery, London, followed by serving an apprenticeship with Rupert Spira at Froyle Pottery in Hampshire. In 1993 he left to work in the Morris and James pottery factory in Matakana, New Zealand.

In 1996 Macdonald-Buchanan started The Brooke Pottery in Northamptonshire, making a range of hand thrown, glazed terracotta flowerpots and large urns. The workshop moved to the North York Moors for seven years and then to Wilton, Wiltshire in 2007 where he began to make large stoneware clay sculptures and vessels.

The Canary Wharf Estate is a major retail destination comprising five shopping malls, including the new leisure development, Crossrail Place, housing one of London’s most stunning roof gardens.  It also has world-class, year-round arts and events programme offering over 100 diverse and culturally inspiring events performed throughout the Estate.