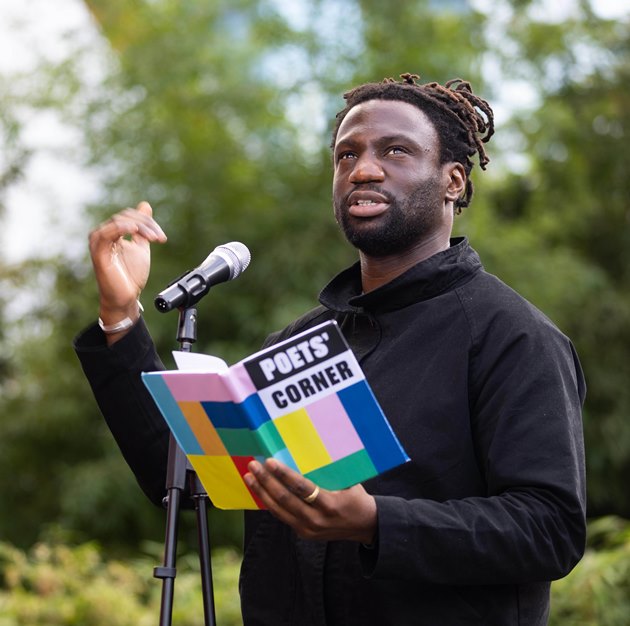 Poets Line Up for The Launch of a New Speakers’ Corner this Black History Month – 29.09.22

A new Speakers’ Corner has opened in Canary Wharf with the aim of giving a platform to young, inspiring Black poets across the capital.

The initiative is part of a collaboration with Canary Wharf and creative collective SXWKS, set up to celebrate and ignite conversation around the Black experience and the importance of observing and honouring Black culture in Britain.

Each poem has been chosen to encourage listeners to share their own stories and experiences in the spirit of Speakers’ Corner where anyone can lead a discussion. Every Poets’ Corner performance will finish with members of the audience invited to come up on stage to perform their own poem, rap or story.

All poems featured during Black History Month will also be published in Canary Wharf’s Short Story Stations – the innovative vending machines that dispense free one-, three- and five-minute stories for visitors to read and gave the first snippet of Bernardine Evaristo’s new book Manifesto last year.

It is the latest effort from Canary Wharf to create spaces that are representative of diverse audiences. Recent initiatives have included commissioning Yinka Ilori to transform Bank Street Park with a vibrant basketball court installation, Camille Walala’s colourful redesign of the Adams Plaza bridge and working alongside Penguin and Bernardine Evaristo to champion and publish Black authors on the Short Story Stations around Canary Wharf for Black History Month in 2021.

Theresa Lola, Young People’s Poet Laureate (2019-2020), said: “Poets’ Corner at Canary Wharf have given a great platform to spotlight on poetry, Black culture and some of Britain’s most impressive Black poets. Poetry offers its author a creative way to capture feelings and experience, and I hope by sharing my poems aloud, I can portray an insight into my own life and culture in a way that encourages others to do the same.”

Camilla Mcgregor, Arts & Events Manager, Canary Wharf Group, said: “We are committed to creating spaces that are representative of our diverse audiences. Collaborating with partners like SXWKS enables us to engage with incredible poets, authors and spoken word artists for both the Poets’ Corner project and beyond. To people who can’t watch the live performances, we will be publishing their words through our Short Story Stations to help further showcase the authors talent and celebrate Black culture.”

Alongside the live performances, Joladé Olusanya and Sarah Aluko will host workshops with local schools. Pupils will be taught about the art of writing and will put their creativity skills to the test by drafting their own pieces, before sharing their work at the final performance.

With the launch of their new free app, visitors, workers and residents only need to check their phone for the latest on upcoming events, discounts, offers and more. The app also allows users to buy tickets, RVSP and check-in to events as well as providing feedback on all different aspects of the Canary Wharf experience.

Theresa Lola – Theresa Lola is a British Nigerian poet and writer and was appointed the Young People’s Laureate for London in the year 2019-2020. She holds a Masters in Creative Writing from University of Oxford where she received a Kellogg Scholarship. In 2018 she was awarded the Brunel International African Poetry Prize. Her debut poetry collection In Search of Equilibrium was longlisted for the 2021 Michael Murphy Memorial Prize. In 2022 her poem ‘Equilibrium’ from her collection was added to OCR’s GCSE English Literature syllabus.

In 2019 Lola was a senior judge for The Queen’s Commonwealth Essay Competition. She has been commissioned by Tate, Selfridges, National Gallery, and Channel 4’s Random Acts. In 2021 she co-wrote a short film which premiered at the 2021 London Fashion Week. She has previously been writer-in-residence at Bethlem Museum of the Mind, and Wellcome Collection, teaching and writing in response to visual art. In 2021 she presented the audio documentary ‘Poems at Dusk’ for BBC Radio 4. She has read her work across the UK at Hay Festival, Cheltenham Literature Festival, Mansion House, Kensington Palace, Southbank Centre, and internationally in Germany, Brazil, and Singapore.

Sarah Aluko – Sarah Aluko is a Nigerian-British author and poet. Her poetry speaks of womanhood, being black, love and loss. In 2017, Sarah Aluko released her poetry collection, Firstborn. Sarah has since been longlisted for the Outspoken Poetry Prize for two years in a row and was listed as part of Nasty Boy’s Creative Class of 2018, which was featured in Okay Africa, Marie Claire, Dazed and Hunger Magazine. Sarah was a speaker at TEDx Tottenham, sharing her journey on becoming an Author. She has also worked as a creative director for Levi’s jeans black history month projects.

Roger Robinson – Roger Robinson is the recipient of the T.S. Eliot Prize and RSL Ondaatje Prize for A Portable Paradise, which was also a New Statesman Book of the Year. He has been commissioned by The National Trust, the V&A, and the National Portrait Gallery, amongst others, and is a co-founder of Malika’s Poetry Kitchen and Spoke Lab. Recent collaborations include poetic responses to the paintings of Hurvin Anderson, for a forthcoming artist’s monograph, and with Johny Pitts, Home Is Not A Place, fusing poetry and photography in portrayal of and for Black Britain.

Inua Ellams – Born in Nigeria, Inua Ellams is a poet, playwright & performer, graphic artist & designer and founder of: The Midnight Run (an arts-filled, night-time, urban walking experience), The Rhythm and Poetry Part (The R.A.P Party) which celebrates poetry & hip hop, and Poetry + Film/ Hack (P+F/H) which celebrates Poetry and Film. Identity, Displacement & Destiny are reoccurring themes in his work, where he tries to mix the old with the new: traditional African oral storytelling with contemporary poetics, pain with pixel, texture with vector. His books are published by Flipped Eye, Akashic, Nine Arches, Penned In The Margins, Oberon & Methuen.

Joladé Olusanya – Joladé is a British Nigerian poet, writer, director and photographer based in London. He is a member of UK collective SXWKS, a Barbican Young Poet alumni and Obsidian Foundation alumni; an international collective of Black poets.

He is a board director for UK arts and creative CIC – Writerz n Scribez; board trustee for Build on Belief, a drug recovery charity, and a committee member for Amos Bursary, a UK education and community charity founded by Baroness Valerie Amos and Colleen Amos OBE.

He’s also the Co-Founder and Director of Rxnin Co. Studios; a global creative agency and production company. Currently, he’s working on his debut short film with the acclaimed Potboiler Productions and his film company – by, the kin. He is also working on his debut photography and poetry monograph which scheduled to be published in late 2022 by US publishing house otherother.