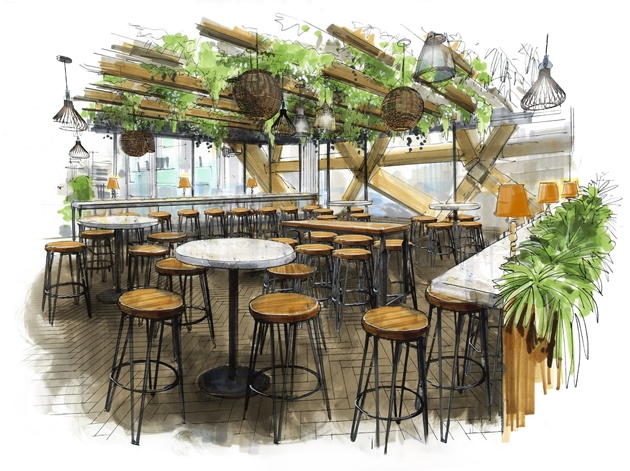 On Wednesday 2 June, Pergola, one of the capital’s most loved hideaways, will launch their first bricks and mortar site in East London, as they open the doors to their new permanent home: Pergola on the Wharf. The new space is a grown-up, elevated version of the original Paddington outpost, with panoramic views over the city from a wrap-around terrace, whilst inside boasts three bars, a cornucopia of food pop-ups, private party spaces and plenty of room for dancing to DJ sets and live music acts late into the night.

Located on the East side of the Crossrail Place Roof Garden, the space has been designed as a botanical waterside Eden which will be flooded with natural light from floor to ceiling windows, and strewn with verdant flora, vines and ferns. The intricacies of the botanics will be offset by a simple, sophisticated colour palette. Beyond this will be an expansive terrace with capacity for 200 guests, offering an elevated view over Canary Wharf’s north dock – the perfect spot to enjoy the sunset with a cocktail. The terrace will also be heated for colder days.

Like the space itself, Pergola on the Wharf’s in-house food offering developed by Nick Wyborn, former Executive Chef of Mac and Wild, takes its cues from nature, serving wholesome seasonal fare from the ‘Earth, Land and Sea’, which will be available year round and have a seasonal focus. Alongside dishes from a host of London’s best kitchens, Pergola on the Wharf will also have a separate space dedicated to housing a rotating series of guest chefs, showcasing innovative dishes by street food traders from the capital and beyond, shining a spotlight on new and exciting cuisines and concepts. At Pergola’s three bars, drinks have been created in partnership with some of the city’s finest distilleries, breweries and wine merchants.

Pergola on the Wharf will regularly host a formidable programme of events, featuring weekend festivals, themed brunch parties, DJ sets, live music performances and more. During their pre-opening weekend over late May bank holiday, there will be an exciting line-up of parties to kick things off, with further details to be announced shortly.

A one stop space for superior food, drink and entertainment, Pergola on the Wharf will be this Summer’s ultimate good time destination.