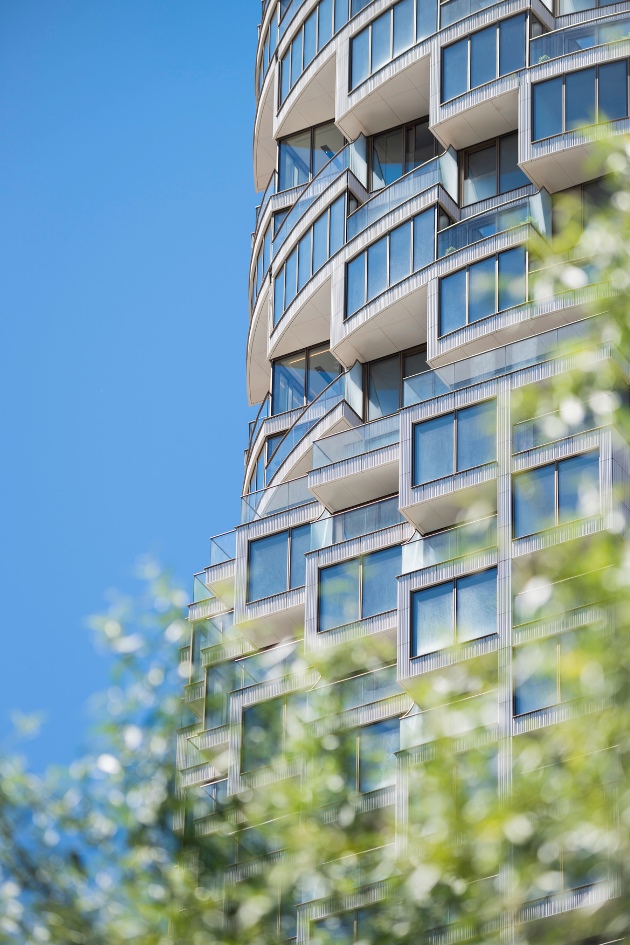 One Park Drive, has completed and welcomed its first group of residents. Offering an unmatched style of high-rise living, One Park Drive represents not only a globally significant piece of architecture for London, but it also represents the very best of 21st century urban waterside living.

The unique exterior has been designed by Herzog & de Meuron, its first residential tower in the UK, whilst the interiors are crafted by Goddard Littlefair and Bowler James Brindley.

To date over 70% of apartments have been sold, with 142 remaining for those wishing to own a statement home in the 24/7 sustainable city of Canary Wharf where people can live, work and play. Prices for the final available apartments start from £840,000.

One Park Drive’s exterior is typical for the work of Herzog & de Meuron, a one of a kind architectural expression (free of any preconceived style), humanising scale, proportions, materials and aesthetics, as  seen in their other works such as the Tate Modern Blavatnik Building in London, the Elbphilharmonie in Hamburg or the Bird’s Nest National Stadium in Beijing (to name a few).

One Park Drive is one of London’s most distinct buildings and its design shows ground-breaking leaps of imagination by the highly regarded Basel based architecture firm. Despite having a truly iconic geometric façade, Herzog & de Meuron designed One Park Drive from the inside out. What it looks like on the outside is shaped by meticulously laid out floor plans, with interiors designed by award winning firms, Goddard Littlefair and Bowler James Brindley.

The scheme is the firms’ response to how best to live in an urban tall building serving human needs and desires in an innovative and intelligent way. One of the most popular features of the developments is the large floorplates and wrap around terraces in the Loft typologies.

Brian De’ath, Director of Residential Sales at Canary Wharf Group comments, “The stunning apartments at One Park Drive offer a design and layout that is unmatched in London. Our owners are not just purchasing a home to live in, but a piece of London history.

“The building is beautifully unique both inside and out, designed by some of the world’s leading architects and interior designers. We have been waiting a long time to welcome our first residents to the building and can’t wait to see it evolve and come to life, especially as the new Wood Wharf neighbourhood continues to grow around it.”

The circular, geometric form of One Park Drive clearly distinguishes itself from the commercial cubic buildings of Canary Wharf and it cannot be mistaken for anything other than a place where people live. The five distinctive zones on the outside, reflect how well the living spaces work on the inside.

The residential elements of the building are characterised by four different typologies; the lower Loft, middle Cluster, upper Bay apartments and Panoramic penthouses. The Loft apartments, with a connection to the waterfront and green spaces below are some of the largest in One Park Drive and feature high ceilings and wraparound terraces. Designed by Bowler James Brindley, the Loft apartments boast free-flowing spaces divided with sliding walls and pivoted screens for flexibility. The spaces are harmonised with the external form of One Park Drive through seamless resign floors, sculptural bathrooms and curved ceilings.

The Cluster apartments form the heart of the building and lower levels are connected to the parks and water, and the higher levels with the sky. Designed by Goddard Littlefair, the Cluster apartments seamlessly integrate all elements from the interior materials used to the space planning. Bathrooms include marble finishes, and living / kitchen spaces feature statement geometric shelving, in a nod to One Park Drive’s exterior.

Ensuring One Park Drive is not an insular building, the ground and first floors are home to the communal areas which positively engage with its beautiful waterside surroundings thanks to floor-to-ceiling windows. The ground floor features a reception, 24/7 concierge, lounge, cinema and library, while the first floor boasts a health club with gym, spa and pool overlooking the water.

Brian De’ath continues, “With the opening of One Park Drive, Wood Wharf is another step further in creating a sustainable, healthy and thriving urban neighbourhood for the future.”

Established in Basel in 1978, Herzog & de Meuron is a partnership led by Jacques Herzog and Pierre de Meuron together with Senior Partners Christine Binswanger, Ascan Mergenthaler, Stefan Marbach, Esther Zumsteg, and Jason Frantzen. An international team of nearly 500 collaborators including the two Founders, five Senior Partners, ten Partners, and 41 Associates work on projects across Europe, the Americas and Asia. The main office is in Basel with additional offices in London, New York, Hong Kong, Berlin and Copenhagen.

The practice has designed a wide range of projects from the small scale of a private home to the large scale of urban design. Many projects are highly recognized public facilities, such as museums, stadiums, and hospitals, and they have completed distinguished private projects including offices, laboratories and apartment buildings. Awards received include the Pritzker Architecture Prize (USA) in 2001, the RIBA Royal Gold Medal (UK), the Praemium Imperiale (Japan), both in 2007, and the Mies Crown Hall Americas Prize (USA) in 2014.

Goddard Littlefair is a London-based, luxury interior design house with international expertise and a global portfolio, established in 2012 by Martin Goddard and Jo Littlefair. The company creates inspirational, award-winning, narrative-led designs for high-end and luxury hotels, hospitality and spa projects, as well as high-end private and developer residential schemes.

The Goddard Littlefair studio is made up of a highly experienced and international team of architects, interior and FF&E designers, along with other related specialists. Their 50 strong team is led by the Founders who continue to drive the company’s creative vision. Their expertise, and an emphasis on a fully bespoke service, has won them multiple awards and industry accolades.

The studio is renowned for their work at the iconic Gleneagles in Scotland, the Hilton Imperial Dubrovnik, and the Kimpton Charlotte Square.

Other recently completed hospitality projects include The Mayfair Townhouse by Iconic Luxury Hotels, Hilton Vienna Park, and The Corinthia Palace Spa in Malta.

Notable high-end residential projects in London include The Corniche, Ebury Square, Southbank Tower and Canaletto, which was awarded Best Interior Design the Development category of the British Homes Awards 2020.

Bowler James Brindley is an interior design consultancy based in the Marylebone district of London, working within the UK and internationally on residential and hospitality projects. Founded in 2014, by Ian Bayliss, Stephen Crawley and Lucy Southall, the company’s core value is to reflect an attitude of true teamwork, understatement, eccentricity and inclusion.