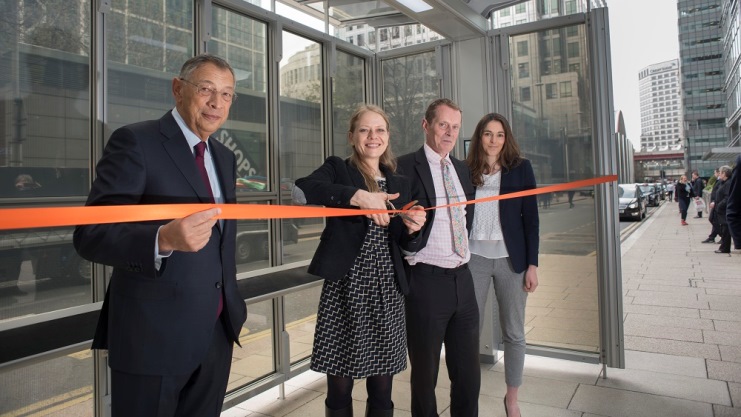 UK based technology company Polysolar has installed its revolutionary transparent solar-PV (photovoltaic) glazing in a smart, energy generating bus shelter – the first of its kind – at London’s Canary Wharf. The opening will be officiated by Green Party candidate for London Mayor, Sian Berry.

Commissioned by Canary Wharf Group, and designed and developed by leading Building Integrated Photovoltaic company Polysolar Ltd in collaboration with leading hard landscaping and street furniture supplier Marshalls, the bus shelter has been constructed using innovative transparent photovoltaic glass that generates clean renewable electricity even in low and ambient light. The energy will be used to run smart signage and other infrastructure on the estate.

The concept of discreetly embedding solar technology into the fabric of structures and buildings presents a simple, attractive and cost effective means of reducing London’s carbon emissions. The solar bus shelter is capable of generating 2000 kW hours per year, enough electricity to power the average London home. The widespread adoption of this new glass technology could therefore make a significant contribution to London’s sustainable future.

In April 2015, Polysolar were selected as winners in Canary Wharf Group’s Cognicity Challenge for smart cities companies, having competed in a twelve-week accelerator programme under the ‘Sustainable Buildings’ stream of the competition. As part of their prize, Polysolar were selected to pilot their technology on the Canary Wharf estate. Polysolar continue to work alongside Canary Wharf Contractors, and hope to incorporate their innovative solar-PV glass into the façades of new high-rise office and residential developments on the estate.

Sir George Iacobescu, CBE, Chairman and Chief Executive Officer, Canary Wharf Group plc, said: “Canary Wharf Group is very interested in the emerging technology of Building Integrated Photovoltaics (BIPV). Polysolar is an award winner from our Cognicity Challenge programme and we are delighted to be funding a pilot BIPV project on the Canary Wharf Estate. We are working with Polysolar to develop BIPV cladding systems which could be suitable to install on the facades of our buildings and we are hopeful that this technology will have the potential to significantly reduce the carbon impact of our future developments.”

Hamish Watson, Founder and CEO of Polysolar explained: “The solar bus shelter provides not just demonstration of the functionality, performance and aesthetics of our PV glass but represents an important application innovation.  Using our solar PV glazing across London’s transport sector, in things like bus shelters, EV charging canopies, walkways and bike parks, could have a significant impact on the city’s emissions, without compromising its environment, architecture or budgets.”

Steve Reddington, Commercial Director for Street Furniture at Marshalls, said: “We’re really pleased that Polysolar approached us to get involved with this ground breaking project; the possibilities with this technology are really exciting. We worked closely with Polysolar to develop a design for the shelter which not only ensures integration into the modern landscape of Canary Wharf, but also means that the solar technology causes no visual impact; we’re thrilled with the outcome.”

Polysolar were previously selected as winners in Canary Wharf Group’s (CWG) Smart Cities accelerator, the Cognicity Challenge (16th April 2015). Then, Polysolar had competed in a twelve-week accelerator programme at Canary Wharf under the ‘Sustainable Buildings’ and stream of the competition.  Polysolar received a £50,000 prize and the opportunity to pilot their ground-breaking technology in one of London’s most forward-thinking districts, Canary Wharf, as part of Canary Wharf Group’s ongoing commitment to adopting the next generation of technology solutions.

About Cognicity
Cognicity is the city of the future, realised today. This pioneering project, designed and delivered by innovation specialist ENTIQ, identifies and accelerates the development of smart city technologies, transforming Canary Wharf into a smarter, more aware city. The first phase of Cognicity was the Cognicity Challenge which comprised six streams of six companies. Partners and sponsors provided guidance to the selected companies over a 12 week curriculum and the winners in each workstream received a £50,000 cash prize and the opportunity to pilot their solutions in the ongoing development of Canary Wharf.

Following the success of the Cognicity Challenge, Canary Wharf Group, ENTIQ and Level39 have established a permanent ecosystem that provides a shared-working area as well as a dedicated showcasing zone for its members.

About Marshalls
Marshalls is the UK’s leading hard landscaping manufacturer and has supplied some of the most prestigious landmarks in the UK with hard landscaping solutions since the 1890s. Marshalls strives to improve environments for everyone by using its expertise to create integrated landscapes that promote well-being, from using fairly traded stone and providing products that alleviate flood risks, to creating innovative protective street furniture.