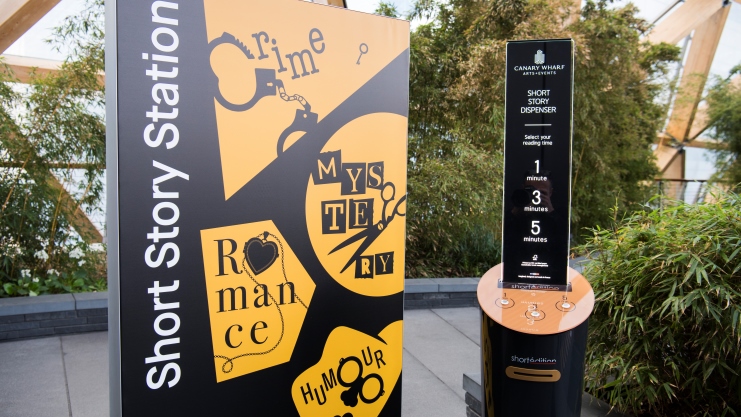 New research reveals that 53,094,541¹ books are left unfinished in the UK every year as busy Brits can’t find the time to reach the final chapters.

The research, commissioned by Canary Wharf, found that 36 per cent of Brits have given up on at least one book in the last year due to lack time, with more than one in four (30 per cent) admitting it’s been over six months since they last finished a book. The study has prompted the destination to install the first ever Short Story Stations in the UK – vending machines that dispense one, three and five-minute stories at the touch of a button.

The Stations, installed across the Canary Wharf estate this week, contain an exclusive story by award-winning British author and screenwriter Anthony Horowitz, that can be read in less than one-minute. The piece, titled Mr Robinson, is Horowitz’s shortest ever fictional work and takes the form of a ‘whodunnit’ crime – not only what he is best known for with his Alex Rider novels, but also, according to the research – the nation’s favourite genre (19 per cent).

Anthony Horowitz commented: “I’ve always loved the challenge of the short story – creating a whole world in just a few pages. So I was very happy to write Mr Robinson for Canary Wharf’s brilliant new Short Story Stations. Here’s a whodunnit, complete with suspects and clues, that can be started and finished in just a minute. I hope it will entertain tube travellers who will know, at least, that they won’t have the frustration of having to get off before the end!”

Anthony Horowitz’s story is available for free to the public from Thursday 4th April via three Short Story Stations which will make their UK debut at various locations throughout Canary Wharf. His story will be one of thousands available from the vending machine-like dispensers which print onto eco-friendly papyrus paper at no cost. The brainchild of French company, Short Édition, the stories cover a range of topics, including classical literature, crime and feel good fiction.

Lucie Moore, Head of Arts and Events, Canary Wharf Group says: “We’re all guilty of saying we’re too busy, but our research found that a staggering70 per cent of us would rather get lost in a good book than get lost down the rabbit hole of social media. Our Short Story Stations provide the perfect digital antidote – a return to analogue scrolling. We hope Anthony’s brilliant new work helps people to fall back in love with short stories.”

Research was conducted by Opinium Research to a sample of 2,000 nationally representative UK adults between 1st – 4th March 2019.