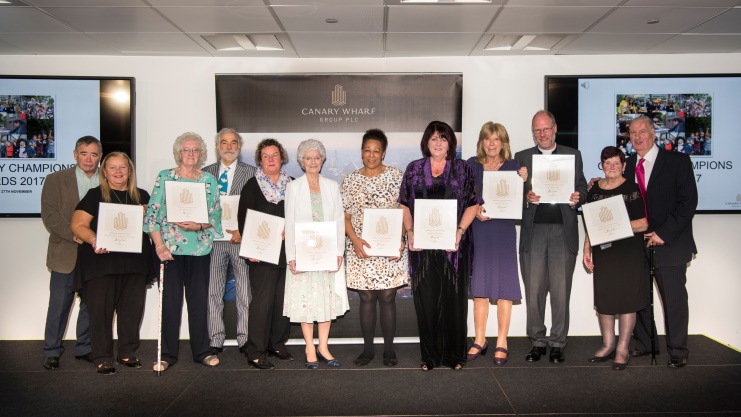 Canary Wharf Group is delighted to announce the winners of its fourth annual Community Champions Awards which last night recognised, and celebrated, the incredible voluntary work of eight individuals and two couples who have been true champions and inspirations to their local community.

The winners’ achievements were celebrated on Monday 27 November 2017 at an awards ceremony hosted by Canary Wharf Group at Level39, the world’s most connected community for finance, cybersecurity, retail and smart-city technology businesses.

Zakir Khan, Associate Director of Community Affairs at Canary Wharf Group said: “In just over two years’ time Canary Wharf will welcome the first of its own residents as the developments start to open their doors, this makes it more important than ever to celebrate the residents in our existing communities who contribute so much to those around them. The Community Champions ceremony provides the opportunity to highlight and acknowledge the contribution of these individuals and show our appreciation.”

Award recipients attended with friends and family. The event comprised dinner and short presentations outlining each of their achievements which ranged from leadership of local sports clubs and community organisations to supporting Housing Associations and local residents groups over many years.

Further details of the award recipients

Organisations: Association of Island Communities Voluntary Council, Trustee of the Mudchute Association and the Mudchute Park and Farm and Committee Member of the Isle of Dogs Neighbourhood Planning Forum.

Organisations: Stepney Community Centre and Friends of Stepney and Brenner.

Organisations: Vicar of the Parish of Christ and St John, with St Luke, Chaplain to HMS PRESIDENT and Chair of Governors at St Luke’s School.