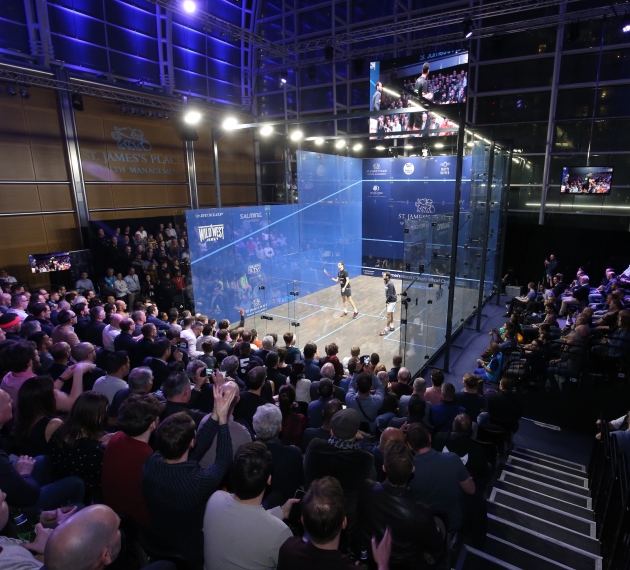 The Canary Wharf Squash Classic, the most prestigious professional squash tournament held in London, United Kingdom, returns to the PSA World Tour calendar between November 14-19 when the 18th edition of the PSA Gold event will be held at the spectacular East Wintergarden venue.

The event begins with the popular People’s Sunday programme, featuring eight first round matches, and culminates in the traditional Friday finale.

Last year’s tournament was the final men’s PSA World Tour event to take place before the tour was suspended for six months due to the global COVID-19 pandemic and fans were treated to a phenomenal final in which World No.2 Mohamed ElShorbagy beat World No.1 Ali Farag in a memorable battle between the world’s top two players.

This year’s Canary Wharf Classic was postponed from its regular dates in March and Tournament Director Tim Garner is delighted to be able to announce that the tournament will go ahead later in the year.

“It’s always a tough decision to postpone an event, but the crowd is such an integral part of it that it felt like the right thing to do,” said Garner.

“In the squash world a postponement often equates to a cancellation. However, thanks to the support of Canary Wharf Group we will be hosting the 2021 edition in November, before reverting back to our traditional spot in March 2022, thus maintaining our unbroken run since the inaugural 2004 event.

“It’s impossible to explain how excited we will be to get back to the East Wintergarden and I know that all our regular fans share our enthusiasm.

“It’s great to give them something to look forward to and we will be in touch nearer the time when we are able to announce ticketing details.

“These will obviously take into account any Government restrictions that may still be in place, as the health and safety of everyone involved is our priority.”

Action from the Canary Wharf Squash Classic will be shown live worldwide on SQUASHTV as well as the official Facebook page of the PSA World Tour (excluding Europe and Japan). The semi-finals and finals will also be shown live on the channels of contracted broadcast partners.