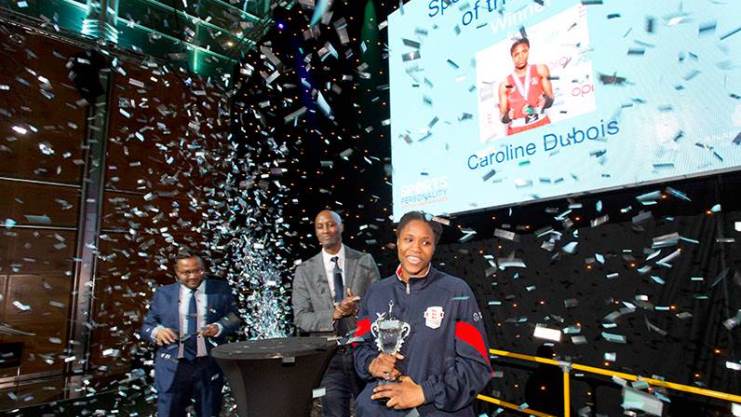 Canary Wharf Group is delighted to announce the winner of the Canary Wharf Sports Personality of the Year Award, Caroline Dubois, whose impressive achievements in boxing wowed the judges.

Caroline is a 17 year old boxer from Repton Amateur Boxing Club in Tower Hamlets. Introduced to boxing at nine years old, Caroline started competing when she was just 11 and her career now consists of a 22 bout run, remaining unbroken and unbeaten in domestic and international competition.

Canary Wharf Group’s Associate Director of Community Affairs, Zakir Khan said: “Congratulations to all the fantastic nominees and winners at this year’s Canary Wharf Sports Personality of the Year Awards. These awards give well deserved recognition to the achievements of local people in their chosen sports. Special congratulations to Caroline Dubois, our Sports Personality of the Year 2017.”

Canary Wharf Group’s Chief Executive Officer and Chairman, Sir George Iacobescu added: “For every individual or team success there are supporting coaches, club administrators, teachers and parents without whom none of this is possible. I would like to pay tribute to them and I am delighted that some of the most hard working individuals and volunteers behind the scenes are also being honoured.”

This is the seventeenth annual Canary Wharf Sports Personality of the Year Awards and Canary Wharf Group is proud to have invested in sport in the surrounding area of London for nearly 30 years as part of its commitment to fostering social and economic development.

The awards encourage sporting excellence and participation in this area of London. The event was attended by over 250 local sports people and administrators as well as a range of local dignitaries, including Poplar and Limehouse MP Jim Fitzpatrick; Nick Bitel, CEO London Marathon and Chair, Sport England; Speaker of Tower Hamlets, Cllr Sabina Akhtar and Olympian, European and Commonwealth High Jump Champion, Dalton Grant.

17 year old boxer from Repton Amateur Boxing Club in Tower Hamlets. She started Boxing at aged just nine years old. Her competitive career started when she was just 11 and now consists of a 22 bout career remaining unbroken and un-beaten in domestic and international competition. Caroline has successfully received a Powerday athlete bursary award to support her participation and fledging days of her sparkling career. She is now a member of the GB Boxing Programme at the English Institute of sport in Sheffield and is identified as potential participant for GB in the 2020 Olympic Games in Tokyo, Japan.

Phoenix are the preliminary team at Lee Valley and celebrated coming second at the British championships in 2017. They trained extremely hard and have a new team captain, co-captain and vice who has lead the team from strength to strength. They started the season well; placing first in their category in London region. They placed first up in Scotland and claimed the most entertaining program award.

Oaklands Weightlifters experienced exceptional success during 2017 producing a mix of National Youth and Regional Championship medallists. Having seen a number of new youths participate, Oaklands Weightlifters fielded a team of new weightlifters to represent Tower Hamlets at the London Youth Games where they finished in third place. Additionally the team was able to fill in a number of other sports such as rowing to contribute to the best outcome for the borough in many years. They have been able to develop a number of very high standard athletes, including two athletes who were ranked within the top 10 rankings for the 2018 Commonwealth Games selection.

London Disability Swimming Club (LDSC) is a voluntary organisation that supports both the para-athlete and their families on their swimming journey. Their prime aim is to build the swimmers confidence by working together since, in their own club many of the athletes are the only para swimmers, when coming together they feel stronger and have the increased self-belief to achieve more. The club operates across all London boroughs and tries to work with as many agencies as possible getting disabled children into the sport. Operating primarily out of London Aquatic Centre, there are currently three squads in the program. The club continues to grow with membership requests from swimmers across London each week, this is helped as the clubs status continues to grow with athletes going on to represent Great Britain at international para events and even achieveing medals on a Paralympic stage.

Celebrating 30 years as a developer and custodian of the world-renowned Canary Wharf estate, Canary Wharf Group supports a total of 398,198 jobs across the UK and has a supply chain initiative that has placed over £1.59 billion of contracts in east London.

The Canary Wharf Estate is a major retail destination comprising around 1m sq. ft. across five shopping malls, including the award-winning leisure development, Crossrail Place, housing one of London’s most stunning roof gardens.  It also has world-class, year-round arts and events programme offering over 200 diverse and culturally inspiring events performed throughout the Estate.