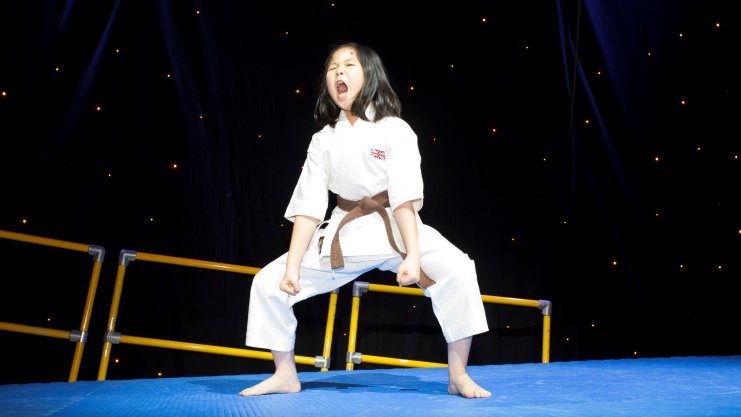 Canary Wharf Group is delighted to announce the winner of the Canary Wharf Sports Personality of the Year Award, Karissa Ho, who at only nine years old impressed the judges with her success in Karate.

Karissa beat off strong competition from a remarkable array of nominees at a ceremony held at Canary Wharf’s East Wintergarden on Tuesday 9 April in front of over 250 local sports people, administrators and local dignitaries to receive her trophy from international cricketer Monty Panesar.

On winning the award Karissa’s Mum Sally said: “Karissa was a little overwhelmed when they announced her as the winner as she didn’t expect it and just wanted to thank everybody”

Karissa started Goju Ryu Karate training aged five, and has now competed in 19 national and four international competitions. During this time she has achieved 14 gold, 12 silver and four bronze medals. The end of 2018 year saw Karissa reach a peak by winning double gold at the Seiwakai International in London, she then went on to represent Great Britain at the Japan Karate Federation Goju Kai World Championships in Akita.

Canary Wharf Group’s Managing Director and Company Secretary, John Garwood added:  “Congratulations to all the fantastic nominees and winners at this year’s Canary Wharf Sports Personality of the Year Awards. This event is a highlight of our year and I am always blown away by the talent and dedication of the nominees and the volunteers who support them”.

This is the eighteenth annual Canary Wharf Sports Personality of the Year Awards and Canary Wharf Group is proud to have invested in sport and talented athletes in the surrounding area of London for nearly 30 years as part of its commitment to the local community.

Ko Yudansha Karate have excelled in 2018 the 15-strong team won 52 medals across 17 tournaments around the country and in Europe. The team have spent time improving tactics and physical conditioning which contributed to an incredibly strong showing at the Association’s End of Year International competition. The team’s results at this tournament helped their club to reach second place overall; outstanding for a small club. The team are now well placed to seize their opportunities leading toward the Tokyo 2020 Olympics and beyond.

Vallance Disability Football Team is made up of players from the Disability Sports Programme at Vallance and they have been training with the club for the past three years. The team entered the South London Special League in September 2017 and have been playing every month since. So far the team have entered ten events and won eight and finished runners up twice.