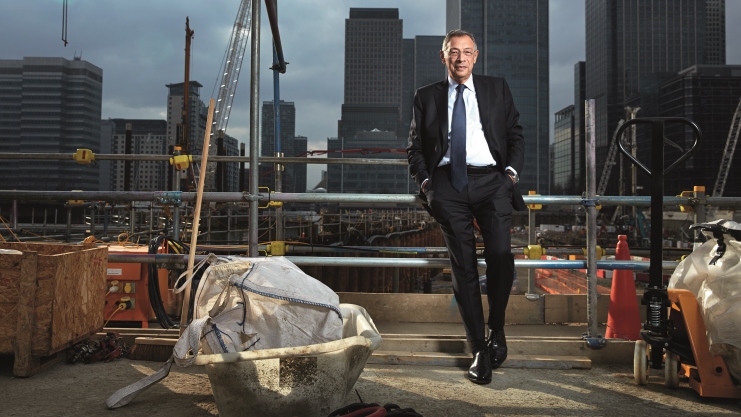 Sir George Iacobescu CBE, Chairman and Chief Executive Officer of Canary Wharf Group (“CWG”) has announced that he will split his roles from later this year. Shobi Khan, a seasoned real estate executive with over 30 years’ experience in the sector, will join as CEO in October 2019. Sir George will continue in his role as Executive Chairman, remaining involved in all aspects of the business with direct responsibility for development and construction as well as external relations.

Sir George has been Chief Executive Officer since 1997 and has held the roles of both Chairman and Chief Executive Officer since 2011. Sir George is credited with leading the development of a former derelict dock into the second largest financial and business district in Europe. Canary Wharf is now the workplace of more than 120,000 people and the company has developed major projects in the City of London including 20 Fenchurch Street (“the Walkie Talkie”), Drapers Gardens and at Southbank Place in Waterloo.

Sir George Iacobescu said: “I have decided, with the support of the board, that this is the right time to split the roles of Chairman and Chief Executive. Canary Wharf has firmly established itself as the fastest growing financial centre in Europe; this new leadership structure will further support its continued expansion.”

“The company is entering a new phase as we seek to diversify our development and management activities, as well as expand through new projects and new locations. We are in a strong position with more than 30 years of development, construction and management experience to further develop Canary Wharf and to take on new major development opportunities.”

“The role of Chief Executive of Canary Wharf Group is one of the most prestigious jobs in the real estate sector. We have completed an international search and have found an exceptional candidate in Shobi. Together we look forward to strengthening our leadership team and preparing the company for the next phase of its growth.”

Shobi most recently served as President and Chief Operating Officer of General Growth Properties. Prior to this, he was U.S. Chief Investment Officer of Bentall Kennedy, a leading global real estate investment adviser. Earlier in his career, he served as Senior Vice President, Investments for Equity Office Properties where he completed over $20 billion of global property and M&A transactions.

Canary Wharf Group plc has overseen the largest urban regeneration project ever undertaken in Europe, on the formerly derelict West India Docks. Over the past 30 years, it has developed 32 buildings at Canary Wharf, totalling 17 million sq ft of office, retail and leisure space and also built the striking Crossrail station and 3 of the DLR stations serving the Canary Wharf Estate.  Canary Wharf is now the 2nd largest financial centre in Europe.

The Estate now houses more than 120,000 employees working for local and international companies and renowned retailers.

In addition, it has 3.6 million sq ft of mixed-use development under construction in 22 buildings and 6.5 million sq ft under planning in 30 buildings across Canary Wharf, Wood Wharf and Southbank.

The company owns and manages the Canary Wharf Estate and has its own construction division.

In recent years the company has diversified into residential development, with more than 5,000 homes planned within the Canary Wharf Estate, over 2,000 of which are underway now, including private residential for sale, a build-to-rent portfolio as well as social and intermediate housing.

The new 5m sq ft Wood Wharf development at Canary Wharf, currently under construction, will provide state of the art office space designed for fast growing tech focused businesses, extensive new retail and apartments for both sale and for rent integrated with social and intermediate housing.

Canary Wharf Group is also in the final stages of the 1.5m sq ft mixed use redevelopment of Southbank Place, formerly the Shell Centre, in London Waterloo, a joint venture with Qatari Diar.