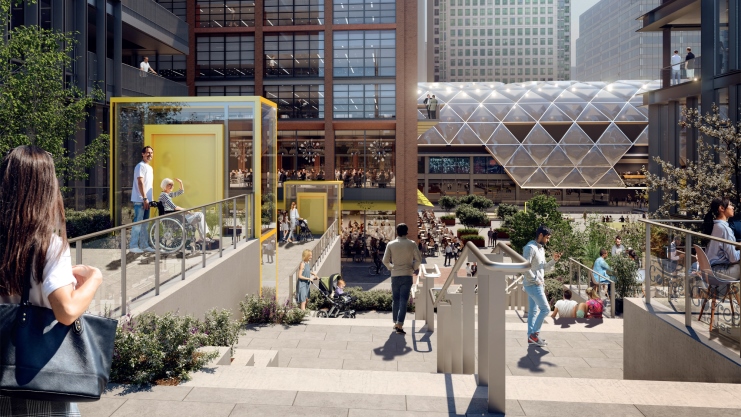 Canary Wharf Group today set out plans for a 3.8 million sq ft (Gross Internal Area) development on the North Quay site at Canary Wharf. The proposals, master-planned by leading architects Allies and Morrison, have been submitted to the local planning authority, the London Borough of Tower Hamlets.

The site, which is immediately adjacent to Crossrail’s new Elizabeth line station on the north side of Canary Wharf, will create a vibrant mixed-use district and accommodate up to 2.5 million sq ft of commercial office space and up to 1.6 million sq ft of residential space, within a flexible framework to suit the demands of future London.

North Quay is the largest undeveloped site remaining at Canary Wharf and one of the largest development sites in London. New public realm in the form of streets and squares will be at the heart of the scheme creating connections between Canary Wharf and South Poplar and integrating with the key transport hubs of the Elizabeth line and DLR. Previously inaccessible dockside will form the backbone of the design providing a 250-metre-long east-west waterside promenade. The flexible framework will enable a campus of buildings with a mix of uses, integrated with ground level amenities, retail and open space providing a vibrant, urban feel.

Sir George Iacobescu CBE, Executive Chairman of Canary Wharf Group, said: “North Quay is a unique location and one of the largest single development sites in London.  Our plans offer a great new place to work and to live, with extensive public realm, high-quality retail, and new connections, next to a brand new railway station.

“This will be a fantastic addition to the Canary Wharf estate and offer an exceptional environment for a range of occupiers and sectors including health and life sciences, technology, media, financial or business services organisations.

“In a dynamic and unpredictable world, the extensive flexibility in this plan will enable us to respond quickly to market demand within a framework agreed with the local authority.”

Jason Syrett, Partner of Allies and Morrison, said: “The masterplan for North Quay is structured around making connections; from South Poplar to Canary Wharf north-south and from West India Quay through to Billingsgate west-east, reactivating the north quayside of the old West India Import Dock. This masterplan provides a confident step forward to the next phase of Canary Wharf as a vibrant, mixed-use and truly connected place.”

This outline planning permission has been designed to allow for flexibility in the same way as Canary Wharf Group’s Wood Wharf project, which is currently being built.

The flexible framework set out in the planning application includes options for:

Other options for uses on site include student housing, hotels and serviced apartments and co-living space.

The planning application has been made after a seven-month long consultation with local residents and businesses. The final stage of pre-application meetings with planners at the London Borough of Tower Hamlets and the Greater London Authority were completed during the lockdown, predominantly online.

North Quay is a 3.28 hectare site previously used as a construction laydown site for the Canary Wharf Crossrail Station, soon to be the operational Elizbeth Line. The Site is located to the north of the Isle of Dogs, within the administrative boundary of the LBTH, at Canary Wharf. It is bounded by Crossrail Place to the south, Aspen Way to the north, Hertsmere Road and the Marriott Hotel to the west and Billingsgate Market to the east.

A planning application was approved in 2007, and implemented in 2016, comprising large commercial offices and supporting retail. A further mixed-use application was submitted in April 2017 but later withdrawn.

Click here for full details of the North Quay application

The company’s current £3.8 billion development pipeline is composed of 1.5 million square feet of office/retail properties, and over 3,000 new homes: for sale, for rent, intermediate and affordable.