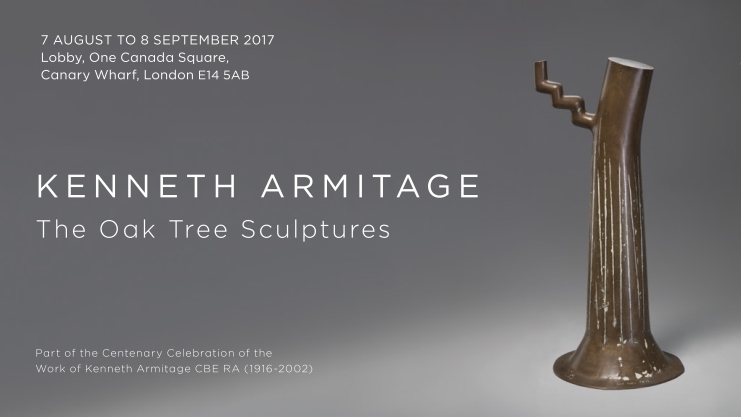 Part of the centenary celebrations of the work of Kenneth Armitage CBE RA arrives at Canary Wharf, showcasing The Oak Tree Sculptures inspired by Richmond Park

Canary Wharf has announced it will be showing a series of works by sculptor Kenneth Armitage, as the only London venue in the centenary celebrations of his birth in collaboration with The Kenneth Armitage Foundation. Leeds-born Armitage, who made his mark at the Venice Biennale in the 1950s, is regarded as one of Britain’s most significant post-war sculptors. The exhibition of ‘The Oak Tree Sculptures’, inspired by London’s Richmond Park, kicks off a season of 20th century sculpture at Canary Wharf and precedes the arrival of pieces by prodigious sculptors Auguste Rodin and Henry Moore, arriving in September and October respectively.

‘The Oak Tree Sculptures’ were inspired by Armitage’s time in London in the 1970s, where he sought refuge from the hustle and bustle of city life in the rolling grasslands and flourishing oaks of Richmond Park. Known for capturing movement in sculpture, Armitage was taken by the majesty of the oak trees, and soon saw their sculptural potential. He began by sketching in the park, soon going on to sculpt table-top bronzes of the trees in their winter starkness or with branches ending in patinated lumps in imitation of clustered foliage.

In 1985, Armitage created the 10ft high ‘Richmond Oak’, commissioned by the Government Art Collection for the new British Embassy in Brazil. Somewhat appropriately, the sculpture suggests a carnival dancer with bracket fungi growing horizontally from the tree trunk. The second cast of ‘Richmond Oak’ will be on show indoors for the first time in London, along with a further 15 smaller sculptures as well as drawings and sketch books in the lobby of One Canada Square.

When a number of these pieces were shown in Japan in 1978 at the Fuji Television Gallery, Tokyo; Gallery Humanité, Nagoya and Gallery Kasahara, Osaka, Armitage wrote in the exhibition catalogue: ‘Out of so many trees, some became special favourites, but all are eloquent, their trunks and branches sometimes lopped (pollarded) adding even greater character. The strange peculiarities are well known – branches of massive girth…or jerky, right-angled twists and turns, as though convulsed by electric shock, and deeply fissured bark textures accentuating like intermittent traffic markings on a motorway.’

Visitors will also be able to enjoy an exhibition tour from curator Ann Elliott and John McEwen, former Trustee of The Kenneth Armitage Foundation, to learn more about the artist, on Tuesday 15th August, free of charge.

The exhibition will run alongside Canary Wharf’s existing arts + events programme. Housing London’s largest collection of public art, with more than 65 permanent works by over 50 world-renowned artists and craftsmen, Canary Wharf demonstrates its strong commitment to art, which plays an important role in the development and success of the 128-acre Estate.

Sally Williams, public art consultant for Canary Wharf Group, comments: “We’re joining The Kenneth Armitage Foundation’s centenary celebrations to honour the Leeds-born sculptor with this show at Canary Wharf in London, a city of long-term importance to him, where he lived, worked and taught. It’s lovely to think that his sculptures will bring some of the majesty and movement of Richmond Park’s great oaks to east London for the public to enjoy, free of charge.”

Kenneth Armitage was born in 1916. He studied at Leeds College of Art 1933-37 and the Slade School of Fine Art, University College, London 1937-39. He then served in the Army during World War Two and on demobilisation in 1946, he was appointed tutor at Bath School of Art, becoming Head of Sculpture when it transferred to Corsham Court as Bath Academy of Art, where he taught until 1956, with leave to be Gregory Fellow in sculpture at the University of Leeds 1953-55.

The 1950s saw Armitage making his mark as an artist internationally. He was exhibited in the Venice Biennales of 1952 and in 1958 when he won the David E. Bright Foundation Award. In 1965 he received the first prize for the International War Memorial Competition, for Krefeld, Germany, but the memorial was never built.

Throughout his career Armitage was exhibited widely in Britain and overseas in both solo and group shows. His work is represented in public collections in Australia, Belgium, France, Germany, Israel, Italy, Japan, Korea, Mexico, the Netherlands, Sweden, Switzerland, UK, USA and Venezuela.

Kenneth Armitage was awarded the CBE in 1969 and elected Royal Academician in 1994.

It is generally considered that Armitage’s work lost some of its force during the 1970s and ‘80s, but there was a revival of interest in his later years when he made a number of monumental sculptures. Both Arms 2000 is permanently resplendent in the Millennium Square, Leeds, and was inaugurated by Nelson Mandela in 2001, concluding his creative career with a flourish that he thoroughly enjoyed.

Before his death Kenneth Armitage ensured that his legacy would be used to progress the art of sculpture, making arrangements to set up The Kenneth Armitage Foundation, a registered charity to work in support of sculptors. The Foundation awards a biennial residential Fellowship and cash prizes for students graduating from the art schools where Armitage studied and taught. The Fellowship provides a sculptor with accommodation and generous well-equipped studio space in Armitage’s former studio and home in West London for a period of two years, together with a modest stipend. The Foundation is run by a small group of Trustees, currently under the Chairmanship of Robert Hiscox.