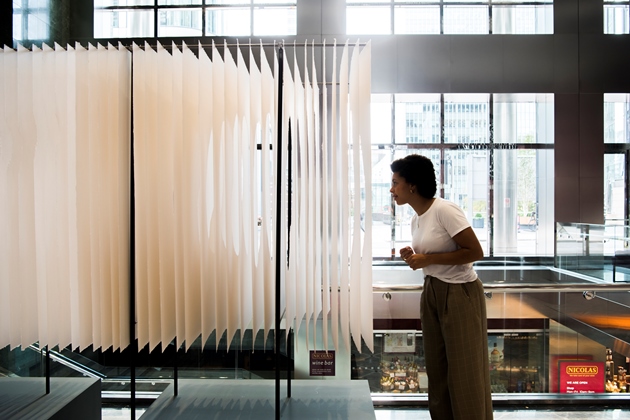 Canary Wharf, home of London’s largest collection of outdoor public art, is set to grow its impressive collection with two brand new exhibitions opening in September – Scale Matters and State of Play. Both will be completely free for visitors to enjoy and found throughout the Estate.

Scale Matters is a free immersive exhibition of monochrome paper installations, elegantly presented around the expansive lobby of One Canada Square. The exhibition will inspire the audience to appreciate paper art in ways they never have before due to the intricacy implemented into the designs. The artwork has been created by internationally acclaimed artist Angela Glajcar and is open to the public between Monday 5 September and Friday 11 November.

The exhibition consists of 20 pieces of three-dimensional art made from paper, leaving its audience to question the concept of size, form and space. Visitors can explore the compelling intricacies of how Glajcar has manipulated the paper, releasing a harmonious interplay of light combined with shadow. Each piece of art from the exhibition has been created by the artist on site, which has been a vital part of the creative process for the unique and fragile artworks.

State of Play (Brooke Benington’s 2nd edition) will also be a new art installation on display, which will feature astounding artwork from a list of talented artists. They include German artist Cornelia Baltes who is known for her paintings that bend the rules of abstraction and figuration, Charlie Godet Thomas, known for his connecting of visual art and literature, alongside the likes of Heywood & Condie, Mark Hosking, Gary Hume, Laurence Owen and more.

State of Play will be displayed throughout the Estate between Monday 5 September – Friday 11 November, with the hope of reconnecting the public with fundamental characteristics of playfulness, curiosity, and delight. The exhibition aims to encompass human experience, forcing admirers to think about how we learn, evolve, adapt and create.

State of Play and Scale Matters are part of the wider ongoing arts and events programme on the Estate, where there is always something to attend or enjoy. The 24/7 city is a place where people can work, live and thrive and enjoy all the benefits; great transport links, access to green spaces and waterside living; and a huge range of activities and amenities.

Canary Wharf is a one stop shop for a fun-filled day, whether it be a solo trip or a day out with family. With hundreds of cafés, bars and restaurants including new restaurant openings Feels like June, Patty&Bun and MMy Wood Wharf, Canary Wharf offers plenty of options to choose from. This September, beyond the unique art exhibitions, visitors can watch the London SUP Open, part of the APP World Tour 2022, catch an after-work movie on the Summer Screens and attend the UK’s leading festival of free outdoor dance, Dancing City.

To find out more about the Scale Matters and State of Play artwork exhibitions at Canary Wharf, please visit:

The ‘boom’ series is a fusion of two divergent references to function. Firstly, civil engineering – a concern with high-visibility, safety, barriers and other types of controlling devises. Secondly, musical instruments – developed using the tonal quality of strings placed under tension. Stripped of utilitarian function, structures such as barrier booms, bollards and safety gates are re-evaluated for their physical properties and their assertive aesthetics. They are also repurposed sonically via attached musical instrument components. The resulting forms resonate more intensely when struck, creating an additional sound, voice, or purpose.

Gary Hume’s Wonky Wheel sculptures are imperfect, wheel-like armatures rendered in stainless steel and brightly coloured enamel. The Wheels are grouped and individual but part of a whole. The economy of line and slightness of shape, make the wheels appear to balance precariously, vulnerable to the slightest touch or influencing action. Together, they reference an imperfect wheel of life and conceive a carnival of time and a ‘wonkiness’ of both personal and historical experience, whose narrative, though inevitable, is never stable.

MONOLLITH [A Brief History of Earth], by Laurence Owen at Jubilee Park

This “sign” at first glance seems to denote a diagrammatic devolution. The strata of time accumulated over eons that has now produced Canary Wharf, is stripped back to its base matter displayed at the centre of the sculpture: a tablet of raw, cracked earth pre-footprint, pre-life, shown through the windows of a graphic climate catastrophe advert. Either a corny epitaph or a tongue-in-cheek forewarning, displaying a gesture of what this district once was or what it could once again become.

RedHead Sunset Stack, by Almuth Tebbenhoff at Reuters Plaza (outside The Alchemist)

The RedHead Sunset Stack captures a bit of the awe that seeing a beautiful sunset inspires in Almuth Tebbenhoff – reduced to the form of a large toy-tower. At the centre the artist put a ragged and unstable human experience in pink and orange which is sandwiched between the steady blue earth and the red sun cubes. The earth and sun may be the only constants we have and even here we are at the mercy of incomprehensible forces.

Jesse Pollock has memories of making daisy chains at school, piercing the stem with his thumb nail and weaving another through, they would pretend to get married, wearing the garnet on their heads. This sculpture, however, is about nostalgia as a disease. The flowers are swollen and weeping at the seams like an infected wound, each one forced into the next. Chain, from a distance is a gleaming portal to the countryside, a rose tinted view on the past but up close its drenched in frustration and reality.

oh-OH, by Cornelia Baltes at Adam’s Plaza (on the water)

oh-OH is a simple gesture – telegraphing the memory of a wedge of swans swimming on open water – using the most economical means possible. The form recalls minimalists like Judd, but there is a humour and pathos which counters the reading of this as austere minimalism.

Red Sentinel / Yellow Sentinel stand watch, ready for action, almost transforming into enlarged playing pieces that are set to engage with the landscape they sit in. Referencing structures found in West’s CGI video work, they continue his exploration into notions of gaming, role playing, purpose, work and labour.

(Wel)come Back, (Wel)come Home is composed of two metal replicas of paper “banners” which you might see on your return to either an office or home respectively. Some of the letters appear to have been torn or lie on the ground, having fallen from the “string”. This “damage” to the banners shifts the mood of the work to one which is altogether more desperate than the whimsical tone of that originally intended.

Aft, by Amba Sayal-Bennett at Crossrail Place Roof Garden Situated within a cul.vated city garden, A”’s inverted sides are simultaneously viewable. A thin layer of bronze separates the excavated spaces that present machined topologies. Employing digital techniques in combina.on with tradi.onal cas.ng methods, the work reflects on both organic and engineered altera.ons to the site. Sayal-BenneD is interested in how the language of the digital persists within our contemporary built environment. By transla.ng a digital form into bronze, she explores the slippages, incompa.bili.es, and resistances that occur when rendering virtual drawings in physical form.

Isle of Everywhere, by Heywood and Condie at Crossrail Place Level -1 Dockside

This new ‘micro landscape’ draws upon one of the earliest garden forms, the Paradise Garden; a sacred environment often symbolised in Persian rug design. In our increasingly denatured age which is struggling to find a balance with the ‘more than human world’, The Isle of Everywhere re-imagines this ancient edenic vision as an environment where the highly artificial is fused with the living to present a new garden hybrid. In Heywood and Condie’s latest horticultural installation, living nature, high tech, and commodity fetishism collide to realise a contemporary hybrid paradise – a metaphor for our globally insecure attitude to the natural world in a garden of unearthly delights.

The Reset Button, by Jemma Egan at Montgomery Square

The Reset Button is an object to be sought out and found. Usually somewhat hidden in location so as not to reset by accident. To reset seems to imply a fresh start, a new beginning. To reset a game, a device, a place, the day, a moment. There is a permanence to the idea – are you sure you want to do this? It is fraught for this reason; on the other side, a chance to restart can promise hope and opportunity, a fresh start. The term reset has some uneasy associations in covid times, ‘the great reset’ a phrase used by technocrats and populists alike to describe the coordinated policy and monetary response to the coronavirus pandemic. The reset button here tries to represent all these things: subtle, unassuming, hard to locate, multi-faceted, 2022.