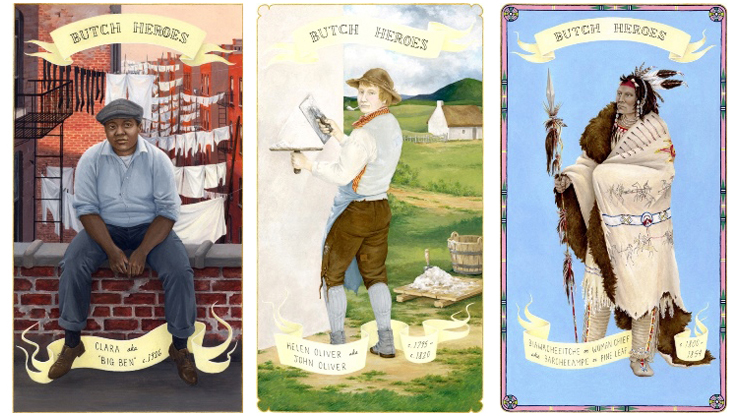 Brodell’s remarkable exhibition delves into the archives of the LGBTQIA community, unearthing a history of people who, although assigned female at birth, spent their lives living out of the confines of their gender. The stories told in Brodell’s paintings stretch back over 500 years to Katherina Hetzeldorfer, who lived as a man and married a woman in Germany, 1477, to Clara aka “Big Ben”, a person known for their robust size, masculine mannerisms and “attention to other women” in 1926 New York.

The project began in 2010, when whilst painting a self-portrait as a Nun or Monk circa 1250, Brodell was considering what their life would have been like if they was born into a different century. As a former Catholic s/he knew “homosexuals” were called to a lifetime of chastity or service to the church, but there must have been other ways that queer people chose to live their lives. “Butch Heroes” hence began as a series of research, and thereafter paintings, into the names and stories of members of the LGBTQIA community in the past, who’s tales had often been explained away in the history books as illness, romantic friendship, opportunistic cross-dressing, fraud, or are rewritten or censored to suit the time period.

The paintings themselves were constructed using a variety of historic sources including artefacts, maps, journals, paintings, drawings, prints, or photos from the time period to help create a real or imagined portrait of the subject. The subjects themselves are those of which Brodell can personally identify, people who were assigned female at birth, had documented relationships with women, and whose gender presentation was more masculine than feminine. These real people were taken from diverse societal, ethnic and geographical backgrounds, spanning from a Japanese artist from the Samurai class to a native Canadian healer and messenger from the Ktunaxa Nation. All linked by their sense of courage and bravery in challenging their societies’ strict gender roles.

Exhibited in the Roof Garden are 10 portraits from the painting series, Butch Heroes, which was published as a book containing 28 of the stories by MIT Press (ISBN 9780262038973).

Butch Heroes is a part of Canary Wharf’s world-class, year-round arts and events programme, presenting over 200 diverse and culturally inspiring events and exhibitions throughout the Estate

Ria Brodell is a non-binary trans artist, educator and author based in Boston, USA, who since 2010 has been reclaiming lost queer history by researching and painting portraits of gender nonconforming people throughout history, from Katherina Hetzeldorfer, who lived as a man and married a woman in Germany in 1477, to more recent stories of people who had to survive by hiding their true sexuality or gender identity. As part of Canary Wharf’s activities in support of Pride in London 2019, we exhibit the fascinating stories of ten such people from Brodell’s series Butch Heroes, published as a book in 2018.

‘I have chosen the term ‘Butch’ for my title because of its dual nature: it has been slung as an insult and used as a congratulatory recognition of strength. It has a history within the LGBTQIA community and is familiar to the cisgender, heterosexual community. In addition to the term’s traditional associations of being masculine in appearance or actions, I chose ‘Butch Heroes’ to indicate people who were strong or brave in the way they lived their lives and challenged their societies’ strict gender roles.’