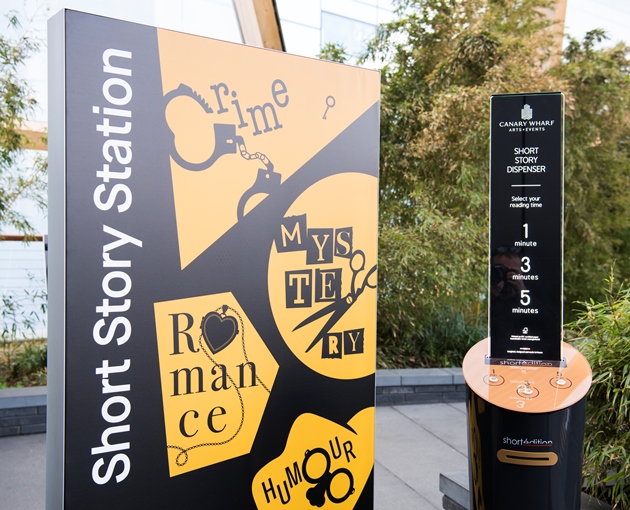 Aspiring authors, young and old, are invited to pen their experiences about ’Life in Lockdown’

Canary Wharf Group has today launched a novel campaign to find the country’s first literary lockdown stars. Encouraging wordsmiths to pen their most creative one, three or five-minute short stories or poems that reflect life in lockdown, the inaugural competition will be the first time new authors will be added to the Estate’s short story dispensers.

Whilst stories should be fictional, authors are encouraged to draw inspiration from their personal discoveries of life in lockdown, such as positive changes, new skills learned, or even the struggles encountered whilst self-isolating.

The nationwide competition launches with two categories. An under 16s category will allow budding young talents the chance to shine, with the top 10 entrants having their work featured on the Short Story Stations as part of the Summer Family Weekend event later this year. The overall winner of the young writers’ competition will receive a £150 Canary Wharf Gift Card.

The adult competition will see 10 stories selected to appear permanently, alongside some of history’s most celebrated authors, in the Canary Wharf Short Story Station library. The winner of the category will receive a £250 Canary Wharf Gift Card.

The Short Story Stations at Canary Wharf were the first of their kind to be launched in the UK, and print either one, three or five-minute stories on demand using eco-friendly papyrus paper. Since their debut in April last year, featuring an exclusive short story from Anthony Horowitz, the stations have printed an incredible 108,272 stories – short yet tantalising tales that aim to help people escape the monotony of their commute through reading scrolls, not scrolling phones.

Research commissioned by Canary Wharf Group in 2019 found that over 53 million¹ books are left unfinished in the UK every year, as busy Brits can’t find the time to reach the final chapters. They also found that 36 per cent of Brits have given up on at least one book in the last year due to lack time, with more than one in four (30 per cent) admitting it’s been over six months since they last finished a book.

Following on from the Short Story Stations’ success on the Canary Wharf estate, the competition aims to keep the love of literacy alive during lockdown and give children and parents a creative outlet during home schooling. The competition has been distributed to schools in the Tower Hamlets area to encourage entries from the next generation of potential authors.

To continue to bring the community together through these uncertain times, Canary Wharf Group has also introduced similar initiatives, such as an architecture competition for schools in the local borough.

Lucie Moore, Head of Arts + Events, Canary Wharf Group says: “We know how much the Short Story Stations have been enjoyed on the Estate over the last year by all who live, work and visit here. With unprecedented time spent indoors, it feels like the perfect time to offer people across the UK the opportunity to contribute with their own stories of lockdown life, and we can’t wait to read what creative tales this competition will undoubtedly produce.”

The competition is now open, with a closing date of midday, Sunday 31 May.

The company’s current £4.2 billion development pipeline is composed of 1.0 million square feet of office/retail properties, and over 3,700 new homes: for sale, for rent, intermediate and affordable.

CWG is an industry leader in sustainability including purchasing 100% renewable electricity for the Estate since 2012 and zero waste going to landfill from the managed Estate since 2009.